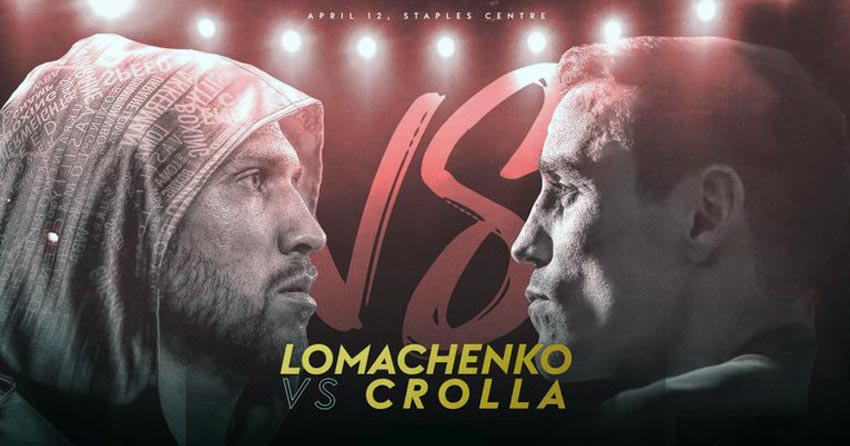 Official fight contract purses state Lomachenko is set to take home a cool $1.2 million with a guarantee of $3.2 million,
while Crolla will make at least $300,000.

He has very big experience, he has very good defence.
For me, I just need to show my best style and 'Style Loma', that's it.

I believe that I can win a world title again, and these are the kind of fights that I'm in it for.
I've earned it, it's not like I've been given this shot. Since losing my title to Jorge Linares, I've come back and had three solid wins.
No man is unbeatable. It's been proven with Lomachenko.

Who is Vasyl Lomachenko?

Vasyl Lomachenko is a Ukrainian professional boxer.
As an amateur he won gold at the 2008 and 2012 Olympics.

Lomachenko is a good friend of Oleksandr Usyk.

Russell and Rigondeaux had no defeats before fight with Lomachenko.
Russell is currently the WBC featherweight champion.

The defeats of Vasyl Lomachenko

Vasyl Lomachenko has 1 defeat in his professional career.
In 2014, Lomachenko lost to Orlando Salido by split decision (SD).

The defeats of Vasyl Lomachenko

Interview with Vasyl Lomachenko after his defeat

Who is Anthony Crolla

The defeats of Anthony Crolla

Crolla has 6 defeats in his professional career, but only one of them by TKO.

The defeats of Anthony Crolla

Who will win: Lomachenko or Crolla?

I believe Crolla's style is made to order for Lomachenko. Then again, you could probably say that about many fighters out there when they have to go against the top fighter in the world. I do think that when Crolla puts the ear muffs on (and covers up defensively), Lomachenko will find his body an inviting target, and then when Crolla begins to lean forward, look for Lomachenko's uppercuts to score. Six or seven rounds of that should be enough for Lomachenko to get the TKO win.